Ordered by Numbers. Images of Architecture from the Slide Collection of Izidor Cankar

Ordered by numbers. Photographic images of architecture from the collection of Izidor Cankar

The exhibition presents images from a collection of photographic lantern slides conceived in 1920 as a teaching aid by Izidor Cankar, founder of the Art History chair at the Ljubljana Faculty of Arts and first lecturer on the subject. Unlike the majority of artwork reproductions in his imaginary museum, these images convey personal experiences of the reality of various places in Europe and elsewhere at the end of the 19th century and the beginning of the 20th. The images were taken by different photographers, many of them unknown, and transferred to glass slides in various photography laboratories at foreign institutions specialised for artwork reproduction and diffusion. Using modern reproduction techniques, they have now been transferred to yet another medium.

Originally intended for use in art history courses, these images also speak to the contemporary viewer in various other ways: anthropological, cultural, documentary and, not least, aesthetic, despite having been created without any artistic pretensions. Dating as they do from a time before some of the architectural monuments they depict were obliterated in the historical cataclysms of the 20th century or reconstructed following World War II air raids, their documentary value is inestimable. Yet these images do not only illustrate how the world has changed, but also how our perception of it has itself changed since film and television entered the visual world and the digital image retrained the viewer.

These glass are wonderful examples of the artwork reproduction culture of the early 20th century as well as of image projection using the magic lantern slide projector. Furthermore, they are valuable remnants of the very first art history courses taught at the Ljubljana Faculty of Arts.

The exhibition marks the 130th anniversary of the birth of Izidor Cankar, founder of history of art as an academic discipline in Slovenia, initiator of the building of the Museum of Modern Art and an outstanding patron of Slovenian cultural institutions in general, a man of many talents and interests who won recognition not only as a scholar, literary critic, writer and translator, but also as a politician and diplomat. 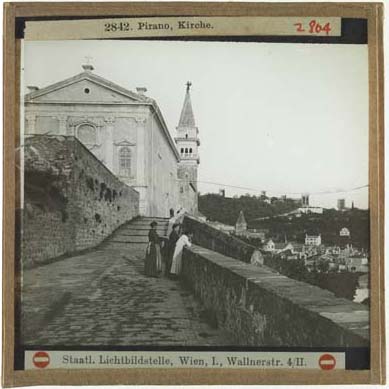 The exhibition is supported by Ministry of Culture of the Republic of Slovenia.