Small But Dangers: Selection from a collection of works

Over the last few years we have tended to develop displays of our work conceived in a largely formalist manner; as we understand them, such displays are rebuses without predetermined solutions, or whose solutions might even be nonexistent. Manipulation of the contents is minimised to the degree where it is just still able to arouse the suspicion that it means something. This poetic provocation serves to question reading between the lines: we underline that such reading is made possible precisely by the existence of lines, and is determined by them.

Our works and their displays are built on the ambivalent nature of language. It binds the individual to the system of social relations. It also constitutes a framework implying the existence of something outside of it. Yet what is not labelled with a sign does not exist. There is no freedom outside of the frame. The moment we step out of one sign system we create another. The unlabelled in language appears only as a possibility, which evaporates as soon as it is made real. It is at the boundary that we look for a solution. We manipulate the image to the point where the unlabelled acquires a potential, which we refrain from fulfilling. This creates a metaphysical effect, reminiscent of a magical spell.

Formally, our works are extremely spare, limited in scope, form, colour and technique, so they create an impression of intimacy, of scarcity, emphasising the megalomaniac structure of the ideological apparatus within which they are located. At the same time, in the context of art, spare form can acquire strong significance. Its small size becomes monumental; an artefact or an act of an intimate nature takes on a big theme, like a clown putting on a pair of oversized shoes. This is why we strive not to create one big work of art, but just the opposite. 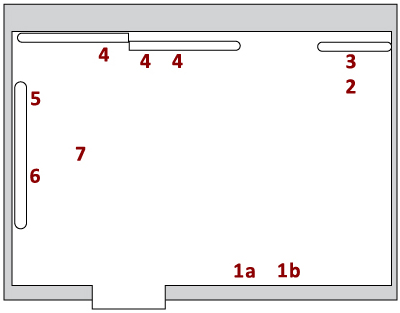 Mateja Rojc and Simon Hudolin are artists of a younger generation. Their collaboration under the name Small But Dangers started in 2004 with the exhibition Process at the Youth Centre C.M.A.K. Cerkno. Since 2010, they have been represented by the P74 Gallery.